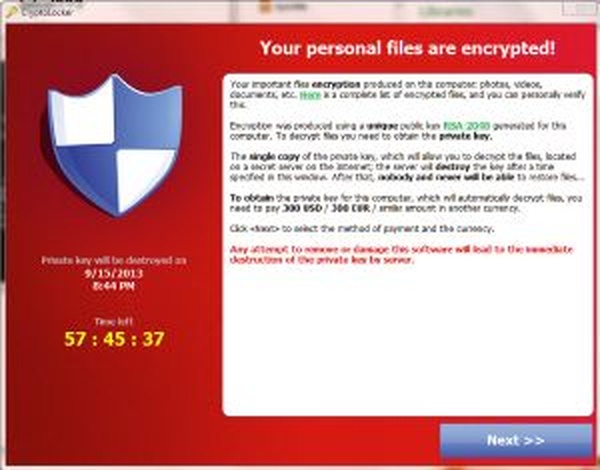 Cryptolocker: There is Hope.

Having your Data being ransomed for Bitcoin sounds like a nightmare, but there are several easy and simple steps that can stop this nightmare from ever happening. The first step does not require software or hardware or even an expense. The first step is user education. As the 1980’s cartoon G.I. Joe would say “knowing is half the battle”. Tell your friends, family, and other relatives, anyone really some basic tips:

If It Sounds Too Good To Be True, It Probably Is

Wow, I have a relative in Saudi Arabia that left me his inheritance? If an email looks suspicious, do not open it, delete it. If you do not recognize the sender, the subject seems strange, or the e-mail has an attachment and you are not expecting it, etc. Get rid of it. A computer virus needs a host and I’m sure you do not want your computer to be that host.

They Probably Left It There For A Reason

Hey, who left this 32 gig USB stick in the middle of the parking lot? No, do not plug that into your computer to see what’s on it. Here is a good example: https://www.wired.com/2011/06/the-dropped-drive-hack/

Remember that saying “Save and save often” from Middle School? Let’s face it. Storage is cheap. There is no excuse to not have a backup solution implemented on your business or home network. Having a backup solution on your network is the best defense against losing vital information.

Remember to change the locks if your house has been broken into. Apply this to your computer or computers. There are thousands of viruses written and released daily. Yes, that does sound horrible, but doesn’t mean there is no hope. Be diligent and make sure your antivirus software is up to date. Run a scan of your system now and again and stop ignoring those update notifications.

My game of Solitaire was interrupted by a Windows update I canceled. Remember when Bob Newhart played a Therapist on Saturday Night Live? His words of advice were always “Stop it”. Operating system updates happen for a reason. Security vulnerabilities that are discovered and patched are number one.

If you do not currently have a network backup plan in place, ACS can help. Email or call ACS at 877-404-8224 today and let our team of experts help you create a backup plan that fits your company's needs.